Explore the history of St Annes, and how the town we know today grew. Look around and see traces of the towns ancestors in local architecture.

It’s understood that all of the Fylde Coast has been populated since the Bronze Age, with scattered hamlets here and there. In Anglo-Saxon and Medieval times it was known as Amounderness. Several of today’s familiar place names are mentioned in the Domesday Book. By the mid 1700s, nearby Lytham was already a town in its own right.

The Early History of St Annes

St Annes was the western edge of the estate owned by the Clifton family from the early 1600’s.

In the late 18th and 19th centuries, the Cliftons had been developing their hamlet of Lytham to take advantage of the increased popularity of sea-bathing. According to the earliest OS maps, this western edge was left to the seagulls and rabbits. The only early buildings were Cross Slack and a few scattered inland farms.

The start of the growth of St Annes

St Annes began with a chapel. In 1873, the then Lord of the Manor, Colonel John Talbot Clifton, built a chapel. He dedicated it to Saint Anne in honour of his wife’s aunt, Lady Anne Bentinck. The chapel was built to serve the tiny hamlet of Hey Houses, which is at the northern end of Lytham.

At the time the chapel was among the sand dunes. It became the parish church of St Annes, which continued to grow from the late 1800’s.

In 1871 just before the chapel was built, the Blackpool and Lytham Railway merged with the Preston to Wyre Railway. These two lines originally had separate termini in Lytham. They were connected to give an uninterrupted line from Preston through the Clifton estate into Blackpool. Clifton Drive was opened the year after.

The growth of St Annes really took off in 1874. Mr Elijah Hargreaves, a businessman from East Lancashire, was on holiday and inspired with the areas potential. After negotiating with the Clifton estate he formed the ‘St Annes on Sea Land and Building Company Ltd’ with seven others.

He was the one responsible for drawing out the plan of the town. Elijah saw that attracting large numbers of visitors from the mill towns of Lancashire could be highly profitable.

The businessmen had £50,000 share capital and the land on a 999 year lease from the Clifton family. They pledged to invest £70,000 in urban infrastructure ‘in a few years’.

They had a grand start with the laying of the foundation stone of the Saint Annes Hotel. However, the early years were plagued with problems and a general reluctance from other business people to invest in a long term plan. William John Porritt was one mill owner who did invest, building stone houses on Clifton Drive North and St George’s Road.

Founding the town of St Annes

The Victorian planned town of St Annes was officially founded on 31 March 1875.

It’s grand start began with the positioning of the cornerstone of the St Annes Hotel, since demolished. That was quickly followed by the Hydro Terrace (which became St Annes Square) and the railway station.

Ashton Gardens was first laid out between 1875 and 1877. After a number of setbacks Lord Ashton eventually bought the park for the inhabitants of St Annes. The gardens are named after him.

However, the early years of development were plagued with problems and a general reluctance from other business people to invest in a long term plan. William John Porritt was one mill owner who did invest, building stone houses on Clifton Drive North and St George’s Road.

St Annes is also one of the few British towns (along with Fleetwood) which was originally built following a grid pattern.

In 1878 St Annes Local Board of Health was set up to oversee matters like sewerage and street lighting. In 1894 it became an Urban District Council.

By then, St Annes had grown considerably. The pier was open with steamer boat trips running from the end of it. Houses and hotels had been built at Clifton Drive North and South. In 1897 the Lytham St Annes Tramway was operating gas powered trams between the towns.

Like most towns and villages all over the UK, the streets, buildings and landmarks of St Annes have changed with population growth over the years.

The Godfrey Edition are copies of original Ordnance Survey maps from 1909. It’s fascinating to compare them with what we know exists today.

The St Annes-on-the-Sea map from 1909 shows an area which is already starting to get popular. It’s not as residential then as it is now, with what seem to be large garden areas and open spaces between areas of development, with plenty of farmers fields still to be seen.

Many of the public buildings in St Annes are from the time of this 1909 map. The Carnegie library, the college and the police station. Also St George’s Hall and Gardens – which was renamed Ashton Gardens.

In 1916, Blackpool made a second unsuccessful attempt to get St Annes to join it in a County Borough. Six years later St Annes instead merged with Lytham to become the Municipal Borough of Lytham St Annes.

This is just a little bit of the fascinating history of St Annes and the wider Lytham area.

Traces of the Past

In January 2020 we received an email from a lady in a charity shop in York, specialising in vintage items.

They’d had a dress donated in this ‘Camile Couture’ box and were interested to see if anyone knew anything about the shop? It’s another interesting part of the town’s social history if you do. Please leave a comment below, or email jane@therabbitpatch.co.uk

Look up, down and around!

There are many beautiful buildings in St Annes, and many architectural details can still be seen. The photo of this terracotta chap was sent in by Aidan Prince. He asked if anyone knew what it was or what it meant?

At the time of taking the photo in 2018, the building it stands at the top of is a William Hill bookmakers.

“The story I have is that it was put there by a local builder as a snub to his colleague who was building properties across the road. It used to be on top of a different building but was relocated when the new shops (Home Bargains etc) were created.”

Do you know anything about this ‘2&8’ detail, on one of the high street shops?

St Annes retains many of its original period buildings in the town and along the promenade and much of the original Victorian/Edwardian character.

This family friendly resort still bursts into flower each summer, just like it did when its forefathers were gardening here. You can also see the history of St Annes in the architecture at the seafront and promenade.

St Annes claims to fame include being the original home of ERNIE, the premium bond selector.

Make sure you visit the statue of the late, great, Les Dawson, laughing in the Peace and Happiness Garden on the seafront near to the pier.

Many other northern celebrities still live in the area. The late George Formby Jr was one of them.

The Mexico Disaster of 1886 is remembered with a memorial statue of a lifeboatman looking out to sea. To date, this remains the greatest loss of life for the RNLI.

If you use Facebook, you’ll enjoy learning about local history from the St Annes Past and Lythams Past groups

Love the Fylde Coast? Sign up for our weekly email newsletter. Packed full of interesting things it arrives in your inbox all 52 weeks of the year. 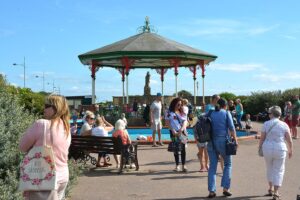 Visit St Annes is part of Visit Fylde Coast, for people who love this stretch of North West UK coastline.

With Visit Fylde Coast you can explore Fleetwood, Cleveleys, Blackpool, St Annes and Lytham plus the market town of Poulton.

Join us on social media, and don't forget to sign up for your weekly enews for lots of interesting information, events, blogs and more straight to your inbox.

We use cookies to ensure that we give you the best experience on our website. If you continue to use this site we will assume that you are happy with it.Ok